As a writer, we are also avid readers. A beautiful part of writing is seeing how the bonds are created and shown to us on paper. I take a hard look at one relationship in particular because it’s close to my heart. Through this you can pull out some important character development writing tips.

I can tell you, having a daughter has taught me more about being a man than any task before it ever has.

Now, saying this as a man that is a combat veteran, former MMA fighter and fourth-degree brown belt in Brazilian jiujitsu may seem silly. But it isn’t.  Your heart and soul are the only things you can truly grow in life, they’re also the thing that takes the most effort. It seems the world is filled with ways to shrink your view and make you jaded. We all have to search for the good. Well, that’s until you learn to love, then you tend to find it everywhere. Everything we experience is a chisel that helps cut the stone of your soul’s form.

As a dad, I’ve learned that girls are everything and nothing like you think they’ll be. My little girl, she wore dresses and played in the mud at the same time. She wanted to wrestle with her brothers and then have a tea party right after. She’s creative, resilient and best of all, she’s her own person. I tell her all the time that life is a series of choices. It’s my job to help her have the internal strength to face the world alone and give her the foundations of a map that she’ll finish making to make those choices.

Little girls are loving and independent. They’re strong, beautiful and gregarious. They have courage beyond belief. Dad’s love their daughters because they’re all the parts of them and their mother that they think are the best parts. When they’re moody… it’s the worst parts too.

Books (Fantasy books) by and large left me wanting when it came to celebrating the father-daughter relationship. I know there are some great ones out there, but there wasn’t the ONE that I wanted to read. The novel about how a daughter truly learns great things from dad and how a dad loves his daughter unconditionally and teaches her about strength, love and survival of spirit.

Sure, there are classic novels that tell the tale in various capacities. To Kill a Mockingbird is probably the most famous to bring the powerful bond of dads and their girls into the limelight. Except, in this book it wasn’t the forefront or driving story. It’s a well-crafted masterpiece bringing to light the love and gentle concern a father gives his daughter.

There are many examples of Father-daughter relationships throughout literature. Pride and Prejudice is about playing favorites, The Tenth Circle flies around conflict, adversity and change. Where as Breaking her Fall is about the strength, love and stability a dad can give his daughter. Each book explores a different view.

Except none of them had magic and fantasy.

Let’s face it. It’s fun to dive into a Fantasy novel. When there is a relationship, it’s often that of the teacher and the taught. And, in that course it feels like most of the books I read with young men have an older male teacher. Conversely, the books I read with a young woman as a protagonist is quite different. They often are required to succeed on their own. It’s odd, but something I’ve picked up on.

This is the thing. Daughters bring magic and fantasy into a father’s life in a way no other person could. They hold a special place in the hearts of men. Besides my own novel, The Stonebinder Covenant, I haven’t found that special book out there that celebrates the relationship.

It’s the tiny moments in life that have the biggest impact. “Big things have small beginnings,” is a saying I think of when I think of my daughter because she’s brought plenty of those into my life. 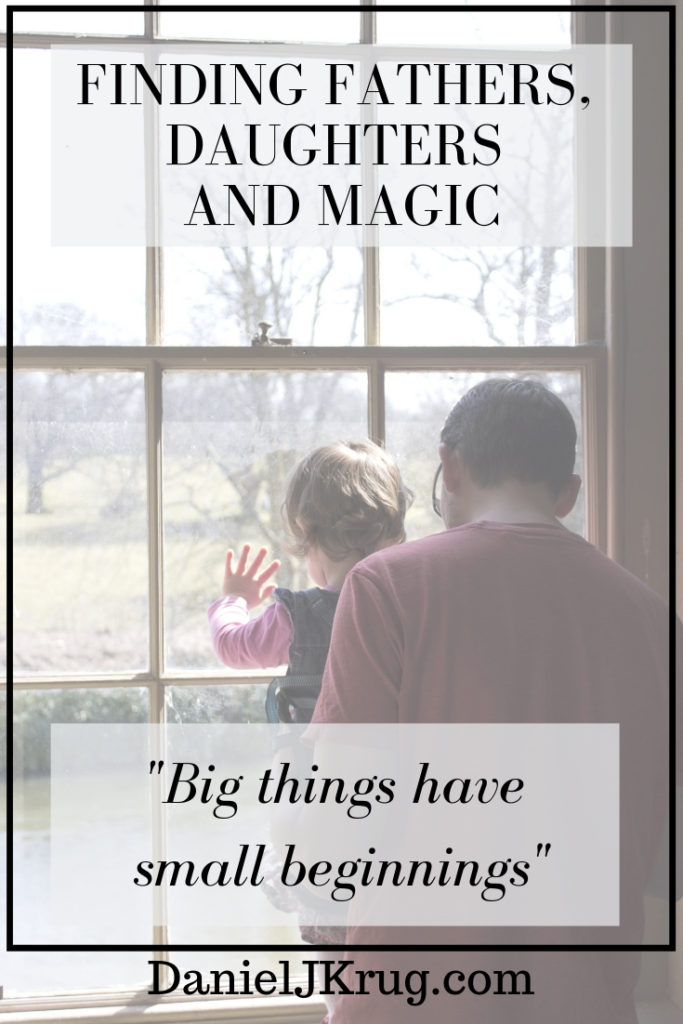