Growing up, I wasn’t very good at fighting. I didn’t do it often and if I did, I lost. I was a decent wrestler for a few years, but outside of a matted floor, I wasn’t much.
I remember the first time I was bullied badly. There was this kid named Noel Something-or-other. He was a jerk. He found out I had a gold medal in my weight class for wrestling and wanted to make fun of me.  He outweighed me by 30 pounds.

Noel and six or seven other kids, some girls (and one of them a girl I liked), stood in a semi-circle under a small stand of trees at recess and made fun of me. I didn’t want to back down.  I thought that would be bad. I was new to the school and I didn’t have any real friends to back me up.  This was my chance to show people I was tough. All the kids laughed and kicked dirt at me.  Noel challenged me to get out of a head lock. I didn’t want to accept, but I did.

I was not super athletic. Wrestling was great two years earlier because I hadn’t hit a growth spurt. Now I was too tall and too skinny. It was sixth grade and Noel was about a year farther into puberty than I was. I thought maybe I could get out of his stupid head lock and stop the bullying.

I was wrong. He had me so hard I thought I died. I passed out after a few seconds of struggling. When I woke up, kids were laughing. Some threw dirt, a couple spit on me and Noel stood there like he was king of the world.

Tears filled my eyes. The first real heart wrenching sense of defeat I’ve ever felt swept over me. He broke my spirit.

I didn’t get mad.

I sat there and cried while spit pelted my face.

Eventually the kids stopped. Eventually I got up. I walked over to a bench next to the door we use to leave recess. I sat down. I spent the rest of my sixth grade recesses on that bench. One of the kids in the circle was the son of my teacher and basketball coach. We were on the basketball team together. The teacher kicked me off the team about a month after the incident. He said I wasn’t performing up to standard and there were other kids who would do better.

I didn’t want to play anyways.  The kids treated me like I was a wimp.

I never told the teacher, or my parents or anyone about what happened. That’s not what you did. Being a rat was worse than being a wimp. Everyone in class knew I was a wimp already, I didn’t need to add to it.

That was until I joined a Jiu Jitsu gym and started doing MMA.

I met amazing people with amazing talent and relaxed confidence. I learned that getting punched in the face doesn’t really hurt. The really good punches don’t hurt at all, you just wake up later from them. I also learned that I was pretty good at it. I was good because I dedicated myself. I spent 6 or 7 days a week training for three to five hours a day. I had dreams of joining the UFC like some of my training partners. I was VERY lucky to be in the same training room as RANDY COUTURE, MATT LINDLAND, ED HERMAN, CHAEL SONNEN, AARON STARK, THE HEALY BROTHERS, just to name a few. I could hold my own with them and they helped me learn a ton. I did a few fights too. 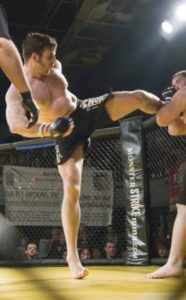 I won most and loved the competition.

Training in those rooms with all those tough people didn’t teach me how to be tough and fight back.  It taught me that my well of confidence comes from within.  Some days I got my butt kicked, some days I didn’t.  Every day we treated each other with respect.  I learned more about myself in that training room than I ever did about fighting.

I’m not scared of Noel anymore. I hope he’s okay and doing well. Confidence is something you DECIDE to have. We carry it like we carry a political opinion. Facts don’t matter. You’re either confident or not. As well you should be.

I’m going to teach my kids something much more important than fighting.  In this world people will attack you, hurt you and do things that don’t make sense.  The decision to move forward, be strong and stay confident will never be theirs to take from you.